Wardrobes and the problems with mould

Wardrobes and the problems with mould

How often do we check behind our wardrobes? Do we ever think there may be mould behind them? Well read on to discover wardrobes and the problems with mould.

I would say almost never!

Don’t we have enough to do?

We get so many queries with “there is a musty smell” and I can’t figure out from where. Lets look at a room where we recently investigated following a call from a concerned client.

We removed a wardrobe door, and internal shelving and here is what we discovered behind…

Now, you eagle eyed folk may notice a vent on the wall and wonder why mould still formed. It turns out the vent was completely covered with the curtains so it was effectively, ineffective.

Mould Solutions were called in to carry out our treatment process.

We start this by spraying the area with our specialised product, we leave it to do its work, which is to kill the mould.

We then wash down the area on completion and in this case, as the mould was quite bad, we repeated this process a couple of times.

Take a look at the end result! 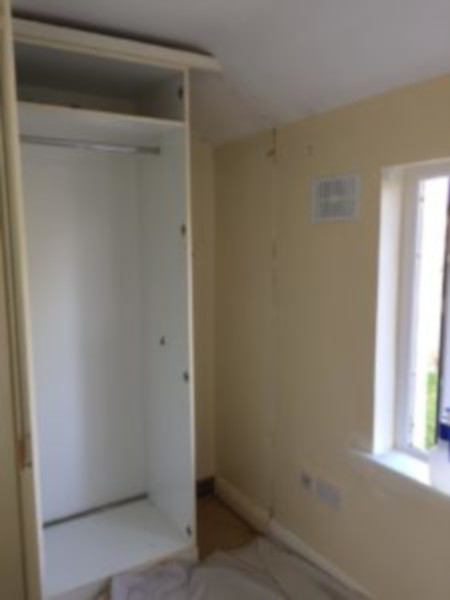 As you can see the mould has now been eradicated, killed and gone.

We suggested to our client to change her curtains width so as to make the vent hole do as it is meant to do, ventilate. Keep an eye on external walls, and cold spots, we suggest at least an annual spring clean look in corners and wipe down external walls for any dust or indeed damp spots you may discover.

If you do have vents in your rooms it is important to check they are not obstructed with any furnishings or furniture and check that they are not blocked up internally.